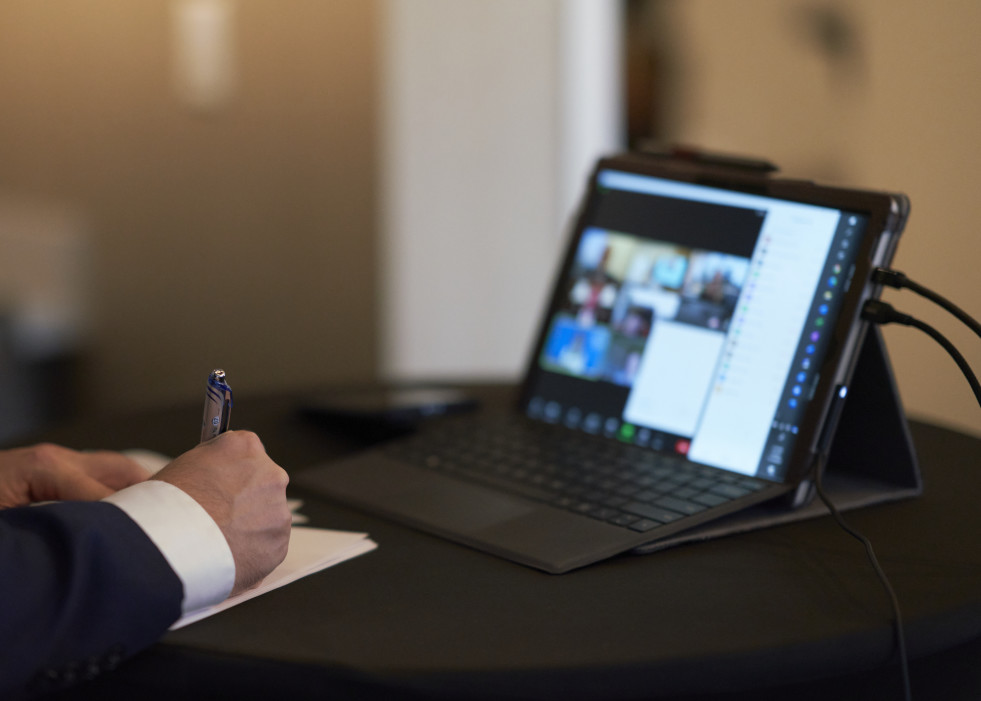 The revolution of online meetings

COVID-19 caused the breakthrough of video conferencing and video calling in 2020. The use of Zoom, Teams, and Meet went through the roof. The few players had to respond quickly to the enormous demand. Now is the time for real innovation.

Anyone who had no experience with video conferencing before COVID-19 has learned it in recent months. Terms such as zooming and face timing were often mentioned. Just calling seems to be replaced more and more with Zoom and Teams sessions. But press conferences and virtual conferences also increasingly require the use of meeting apps.

The app stores of Apple and Google are clearly showing that we have adapted to the new normal. Microsoft Teams was Apple’s most downloaded business app at the end of 2020, number two was Zoom, Google Meet ranked third, and WebEx number five. At Google, Teams and Zoom were also at the top of the list of most popular apps.

It took some getting used to but at the end of 2020, some people say they experience it as ineffective and quite tiring. Video calling, especially during longer meeting sessions, demanded our utmost ability to concentrate. The technology, with faltering connections and bad sound, is also a source of frustration. Still, 55 percent say that online meetings should remain part of their working life even after the corona crisis.

Before the pandemic, video conferencing was primarily a niche application for large international companies, which usually purchased separate hardware for this purpose.

However, WebEx already made a breakthrough years ago. It was the first affordable cloud conferencing solution that only required installing software. In fact, the company got an unlikely boost after the 9/11 attacks.

When WebEx was sold to network company Cisco for $ 3.2 billion, its quality deteriorated. Customers wanted WebEx to be more reliable and intuitive, but the Cisco subsidiary couldn’t deliver.

Frustrated with the turn of events, WebEx engineer Eric Yuan decided to start his own business. Around 2011 he founded his own company Zoom. He really wanted to do it differently: without hard-to-remember PINs and meeting IDs. You should be able to start a meeting via a simple link. It turned out to be the goose with the golden eggs.
To persuade customers, Zoom became a freemium solution: up to a hundred participants could use the software for free for 40 minutes per session. For example, his customers could discover that Zoom was better than WebEx.
Pretty soon the company had a million users. As of 2017, Zoom was already a so-called “unicorn” on paper, a company worth a billion dollars.

The corona crisis has definitely put the listed company on the map. Zoom was immediately used in March of this year by schools that were closed due to corona. In April, Zoom already had 300 million participants in meetings.

However, shortcomings soon came to the surface: it turned out to be childishly simple to enter a meeting via an invitation link, a phenomenon that became known as Zoombombing. Institutions such as NASA, schools in New York City, and SpaceX immediately imposed a Zoom ban. But Zoom acted quickly, fixing the bugs, buying start-up Keybase to bolster encryption, and hiring Facebook veteran Alex Stamos as chief of security.

The fact that Zoom was able to survive is also because there are few hijackers on the coast. FaceTime (Apple), Duo (Google), and WhatsApp (Facebook) have expanded their group sessions to more participants, but they are not real video conferencing apps, where you can, for example, share presentations. Afterward, Google made the mistake of separating video conferencing (Meet) and pure chatting (Chat), while the strength of an application such as Microsoft Teams is precisely the integration.

Teams is much more of a work environment where you can work together on files in real-time. It was also smart of Microsoft to partially open Teams to private users, so that the platform can also be used for, say, the bridge club. The restrictions that still apply to the desktop will be lifted soon. Breakout rooms have been launched to better facilitate education. This way you can easily create a working group within a class.

Significantly, even Slack has not yet managed to enter this market, even though their software offers largely the same possibilities as Teams. However, that could change as CRM giant Salesforce acquires Slack for $ 27.7 billion. After the acquisition, Salesforce wants to combine the chat app with Salesforce Customer 360. The step to video conferencing is then made in no time.

The market potential for web video conferencing is no longer in doubt. The market is growing from $ 4.8 billion to 9.2 billion by 2026, according to some studies.

However, the market segment could still change. For example, the question is whether Zoom can maintain its popularity. The company derives 62 percent of its revenue from companies with more than ten employees, but customers with ten or fewer employees grow much faster and the company earns much less from that. At the end of 2020, eighteen percent of total sales came from customers spending $ 100,000 or more, compared to 33 percent the year before. These developments are worrying for the listed Zoom.

Both Microsoft Teams and Cisco’s WebEx have added at least 100 new features since the pandemic. Consider introducing noise cancellation to filter out the sound of babies crying, barking dogs, and neighbors mowing their lawn. “A direct consequence of the pandemic was that we had to innovate faster,” Jeetu Patel of WebEx told tech site Recode.

Innovation is necessary to retain customers. Over the past year, many platforms have lifted their restrictions, such as the maximum number of users within a given bundle. Core functions are expected to remain or become free. You will then have to pay for extra functionality.

For example, artificial intelligence should make video conferencing smarter. The technology can provide automatic video summaries for absent participants and there will be opportunities to better find or display supporting documents. Teams will soon introduce a dynamic view, where extra attention can be focused on content that is presented or on the person who provides the presentation. Other participants then disappear into the background for a moment. Google Meet already offers live subtitles in multiple languages ​​and it won’t be long before we have real-time translations.

Integration with other business software is also becoming important. Last year, Zoom introduced Zapps, apps that can be used in Zoom meetings and can control workflows before, during, and after meetings. More than 35 partners have already joined the platform for this.

The Zoom portfolio will be further expanded this year with e-mail solutions and a calendar. Little is known about this, but it seems that Zoom wants to compete with Microsoft Outlook. Possibly out of personal life. Because even though video conferencing is here to stay, the various services will eventually face a significant decline in mass teleworking once the pandemic is over.

One of the options for broadening is events. The OnZoom platform was launched in October 2020. This allows customers to host events online and also sell tickets for them. Cisco in turn acquired Slido, a company that provides services to enhance the experience of online events, such as online conferences. Daughter WebEx is currently also developing meeting software for governments.

In addition to all this, the hardware is considered. Dell recently launched the first monitor with a button for Teams. And last year, Google announced Series One with China’s Lenovo, a product line of video conferencing hardware with Google Meet. The package consists of a camera, soundbar, a small computer and a screen for operation. Logitech in turn launched RoomMate, conference room hardware that can function without a PC.

The broadly initiated developments make it difficult for newcomers to enter this market. This also applies to the almighty Facebook. The American company launched Workplace a few years ago, but the business collaboration platform ends with a market share of only 0.02 percent which is far below Teams, Slack, SharePoint, and even Microsoft Yammer, let alone video conferencing. Messenger Rooms was rolled out in 2020, a video service that allows fifty people to make video calls at the same time. The service can be used directly from Facebook Messenger or Instagram but is not seen as a business solution. This year there will also be improved video conferencing options in WhatsApp on the desktop. In principle, WhatsApp could still appeal to the small business market, but Facebook is starting with a considerable backlog.

An application that still offers plenty of possibilities is virtual reality, which has been ideally developed for remote encounters. It is of course not a replacement for regular video meetings, but could, for example, lend itself to scientific presentations where models can be shown in 3D, among other things. Former employees of Google, Samsung, Microsoft, and Apple work on VR meeting solutions under the name Spatial. Their software runs on Oculus Quest, HoloLens, and Magic Leap, among others.

HTC, a manufacturer of VR helmets, has also launched its own virtual meeting platform. The software offers support to at least thirty participants. VIVE Sync offers, among other things, links with Microsoft’s storage service OneDrive.

It raises the question of whether and how these new platforms will meet the existing meeting tools. In any case, the room for innovation is clear.